Arachova, a cosmopolitan destination with a strong traditional character, is built at the foot of Mount Parnassos and “captivates” its visitors all year round. 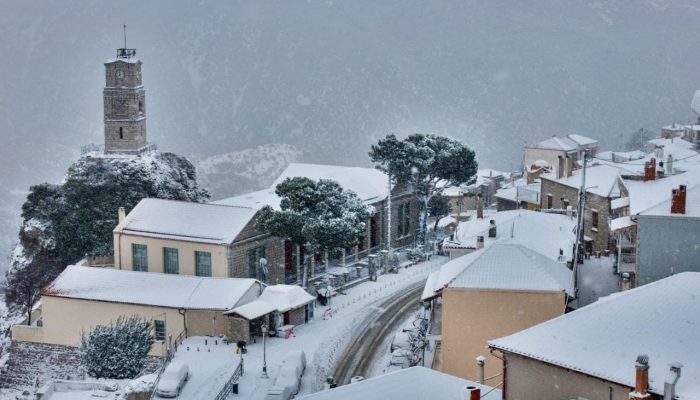 Arachova is synonymous with the intense nightlife and the good traditional food, especially in the winter months, with a large number of visitors swarming for skiing and winter sports on the snowy slopes of the Parnassos ski resort and for the frenzied all-day and night parties at the nightclubs of the region.

The central square, Lakka, is where the heart of the mountain town hits, as there you will find plenty of cafes, bars and nightclubs to enjoy your coffee or drink, in their warm interior during the winter or under the cool breeze of the trees in the summertime. Walk through its picturesque cobblestone streets, admire the area’s “landmark” – the Arachova Clock – that has stood in this position for over 150 years and climb the 264 steps that lead to St. George’s Church to enjoy the magnificent view.

Visit the Folklore Museum of Arachova where samples of folk tradition and especially textile art -which flourished significantly in the area- are preserved. Stay in traditional hostels, wooden chalets, apartments for rent or large luxury hotels and organize your sorties in the surrounding area.

Visit the historical Delphi, the “navel of the earth” as the ancient Greeks called the area, with its historic oracle and the mythical Pythia with its anchors, just 12 km from Arachova, while for more remote excursions, 30 km away in the village of Stiri Boeotia, there is the the Monastery of Saint Loukas, which is a UNESCO World Heritage Site and just 20 minutes by car is Agoriani, a breathtaking and fairytale-like landscape of lush olive groves and waterfalls.

Taste the traditional Rumeli cuisine with delicious local delicacies, such as the leek sausage, the lamb sausages, the mutton soup, the roast and traditional pies, handmade noodles as well as traditional seafood delicacies. Although Arachova is better known as the “Mykonos of winter”, the destination is also indicated for the summertime with the magnificent beaches of Galaxidi, Itea and Antikira within close reach. For the most active ones, Arachova offers a plethora of activities all year round, such as horseback riding, hiking, cycling and cave exploration in an unparalleled natural beauty. 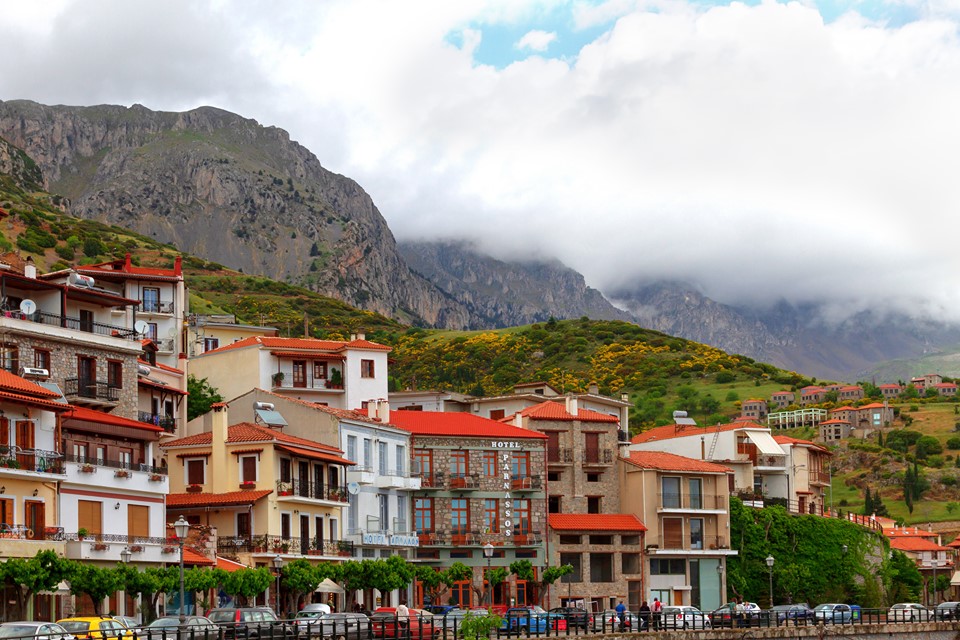 Arachova is one of the most popular tourist destinations in Greece, mainly in the wintertime due to its proximity to the Parnassos ski resort and its mountainous location.
It is built at the foothills of Mount Parnassos and belongs to the Municipality of Distomo – Arachova – Antikyra, Regional Unit of Boeotia, Central Greece.
The unparalleled beauty of the natural landscape with firs, stone-built alleys, its traditional architecture and its proximity to the beaches of Galaxidi, Itea and Antikyra and the archaeological site of Delphi make it a dream destination for all the seasons of the year with a variety of options for accommodation, dining, sightseeing, ancient and Byzantine cultural monuments and a variety of activities in nature.
Traditional guesthouses, wooden chalets and large hotel units, 17 in number, according to official data from the Hellenic Chamber of Hotels (HCH), as well as rooms and apartments compose the landscape of hospitality in Arachova. Given that there are a total of 36 hotel units operating in the Boeotia Regional Unit (HCH, 2018), we come to the realisation that about half of them, as well as the only two five-star hotels throughout the area and the six of the eight four-star hotels are in Arachova.
Traditional taverns, restaurants, bars, cafés and nightclubs for frenzied parties until the morning offer local gastronomic delights and entertainment for all tastes.
Access to Arachova is by road, through a well-maintained network, while the axis connecting Arachova to the Parnassos ski resort is recently refurbished with a non-slip carpet and yellow stripes, which are constantly snow plowed.
According to the official data, the Greeks are the main “caterers” of the region’s tourism industry, as Arachova has for many years been their traditional winter destination, some of which have invested in holiday homes and luxury villas. According to data from the Hellenic Statistical Authority (ELSTAT), throughout the Boeotia Regional Unit, which is administratively owned by Arachova, there were 68,209 arrivals in 2018, including 28,900 overseas visitors, who spent 37,878 overnight stays and and 39,309 nationals who made 77,259 overnight stays.

The main attractions in the area are the Parnassos Ski Resort, which is flooded with crowds in the winter months, and the Delphi archaeological site with the museum, just 12km from Arachova. According to ELSTAT, in March 2018, 19,475 people visited the Museum of Delphi, up 23.9% from the corresponding month of 2017.

In addition, the area, at a distance of about 30 – 40 km, has significant historical, cultural and religious interest such as:
Chaeronea with the marble “Lion of Chaeronea” located at the entrance of the village and built during the period of Pausanias by the Thebans in memory of the fallen men of the Sacred Lodge who buried it after Philip’s victory in 338 BC .,

Stiri Boeotia, where the Monastery of Saint Loukas is located, a world heritage monument of Unesco,

the heroic Distomo with its mausoleum to “witness” the atrocities of the Second World War,

the Korikeio Andro or “cave of Panos” located in Parnassos in 1,300 meters above the sea level, with its stalactites in the shape of animal skins (cork) and its amazing acoustics,

Livadia with the springs of Krya, or the river of Erkinas it is best known, which took its name from a Water Nymph. The visitor can admire the bust of a statue depicting the Nymph Erkina lying in the middle of the river while there are historical references to the existence of a particular oracle dedicated to Zeus, but which has not yet been found, as well as the springs of memory and forgetfulness. Those who asked for good were drinking the water from these springs to forget what they had in mind and then the water of memory to remember what they had heard in the oracle,

the mysterious and impressive Galaxidi craters, which according to scientists, their formation is due to the sedimentation and the erosion of the soil while some refer this as a prehistoric meteor rain,

the impressive Sevastomos cliff near the ski resort of Parnassos, at an altitude of 1,300 meters, where its southernmost glacier of Europe lies. There the snow never melts.
At the same time, it presents opportunities for developing specific forms of tourism related to the the outdoors and nature activities such as:
-paragliding in Delphi, Arachova, Itea and Galaxidi
-diving in Itea,
-sky diving in Castro, about 40 minutes from Arachova
-climbing field in Amfissa,
-traced routes for enduro bikes as well as downhill
Generally speaking, Arachova shows a potential of growth in terms of its tourism and is deservedly called the “Lady of Parnassus”.
Note: The data reported is collected from official sources by the Aegean Islands Promo project team.

Explore the "noblewoman" of Parnassos and live an unforgettable experience.

Boutique Hotel SKAMNOS Arachova by Delphi Greece, is at 1,220 meters, at the north-west edge of the small…

White Hills Villas in Arachova are located only 800m. from the center of the picturesque small town.…

Nostos Suites by White Hills lays in the center of beautiful Arachova, but in a quiet neighbourhood of the…

Stone Suites by White Hills are rooms in Arachova, located in the center of the town, only 2 hours from…

Anyone looking for authentic tasty treats should pass through the Archontiko's door in Koukoura,…

With over 40 years' experience in the field of optics, this establishment has the depth of knowledge to help…

With studies in the field of decoration at Vakalo Art & Design College, Georgia Tiligada is fascinated…

At the feet of Mount Parnassus, we cultivate our privately owned vineyard, having been endowed with years of…